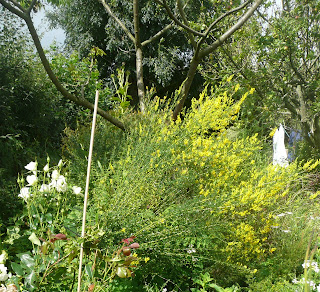 Gensita tinctoria - dyers green weed- this I am drying 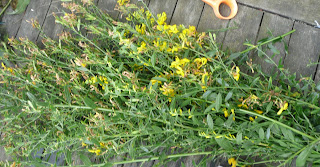 Some of my gensita had gone to seed while I was away  so I cut some to try and see what it was like to dye with in this state. Some plants  lose all their colour when they have gone to seed. 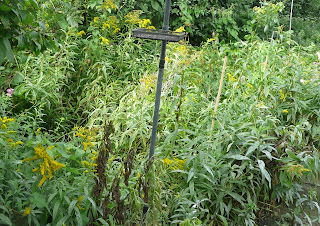 Golden rod Solidago canadensis- this does not seem to dry well so I will try and dye stuff with all  over the next few weeks as overdyed in indigo it  gives fabulous green. 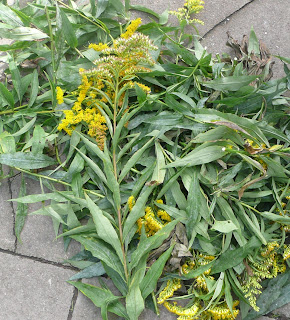 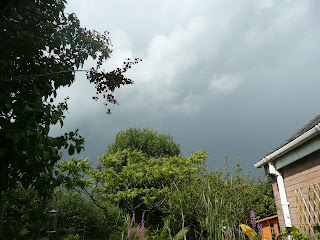 Look what is coming over.!   Harvesting became a race. 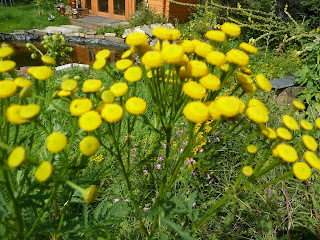 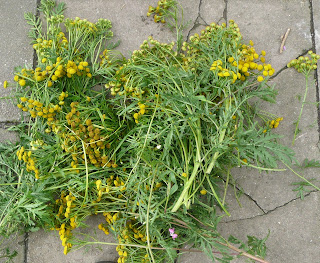 Tansy Tanacetum vulgare.  I am drying this this year for the first ime to see what it is like dried. 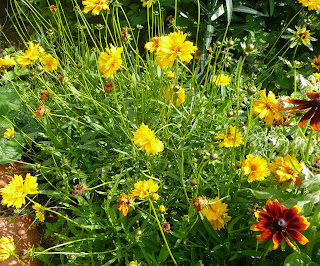 Coreopsis sp.  I have both this and the Coreopis tinctoria which has a much smaller flower  but which is prolific.  Coreposis has been very slow to flower  this year as it has been such a bad summer  but now it has been getting going. 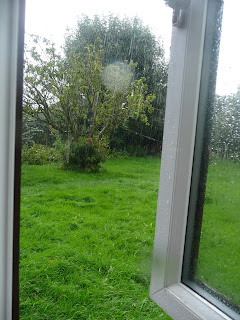 Moving on with Bananas and the 123 vat.

The reason for the title "moving on"  to this blog  is as some of you may know is that recently I was subjected to offensive letters  and emails by Mrs Joan Wells of Lincolnshire ( to distinguish her from any other Joan Wells) and her friend Peter Macphail..     However thanks to the support of all my friends  and blog followers who have been quite magnificent I have got  through it and have now deleted the blogs which contained all the offensive letters I had received.  This blog is about having a bit of fun with bananas. .An alternative title of which could  be

Never throw your  bananas away.

Last summer I met Michel Garcia at ISEND 2011 natural dye conference in France and later took a three day workshop with him using his innovative sugar and lime vats.  These indigo vats use fruit sugar as the reducing agent instead of either the tradional fermentation process which result in reduction, or the modern chemicals which do the same.  For those baffled by the whole indigo dyeing process reduction is the  process by which the insoluble blue powder  of indigo (more correctly called ndigotin)  is turned into its soluble dyeing form. See it as one chemical  biting a bit off another and changing it so it is soluble and will dye.  The oxygen in the air will change  it back. and the fibres go from yellow to blue.   Confused? Read on.

I wrote about making up a lime fructose ( fruit sugar vat) last year and Leena has written an excellent and very thorough  account of her experiments with the sugar lime vats. Jane Deane also has a fascinating   series of posts about her experiments  too with the 123 vat  including her use of henna snd bananas 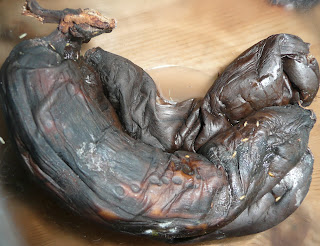 Michel says that the fruit should be ripe and as you can see when I returned form a weeks holidays my bananas were very ripe!   Tired as I was by a long drive I leapt on them with cries of delight.
I didn't  get to them till yesterday ( Monday) so they  sat in the fridge for two days . 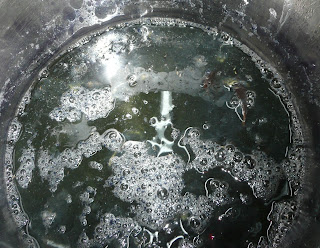 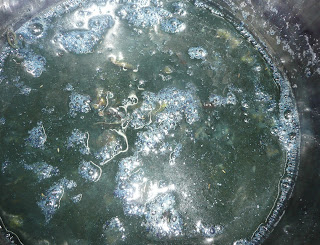 The vat cooled down quite rapidly to tepid.
The bubbles are  now bluer and there is a scum of indigo spread finely over the surface.  This  look to the vat is quite typical of lime vats -(the  other one being the zInc lime vat)  However in retrospect  I think I should have stirred it and that this  would  have concentrated the bubbles in the centre. 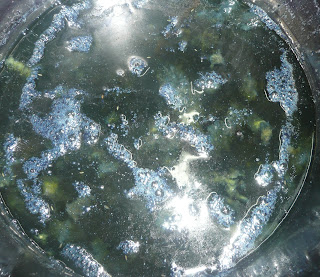 The Vat after 30 minutes . The blobby stuff under the surface is the bananas
Then I added pieces of cotton -dry.  MIchel does this and it is also a shibori technique for keeping your patterns very crisp.  It definitely works better when the pH is high as it is in this case
One of the differnt  things about this vat is that Michel puts the  fabric in dry,  scrunches  it around  in the vat and pulls  it out so the fabric is only immersed for a minute or less .  However some others using this vat have  reported a rapid fade of colour.   Michel is a chemist  and my chemistry is an A Level taken forty years ago so I bow to his  superior knowledge but  my gut feeling is that indigotin needs time to move through the fabric so I left mine in for 15 minutes the first time - in the vat which had been standing for ten miutes- then for half an hour or so inadvertantly in the vat which had been sitting for half an dhour.  This  latter vat appeared to be the more reduced vat too. 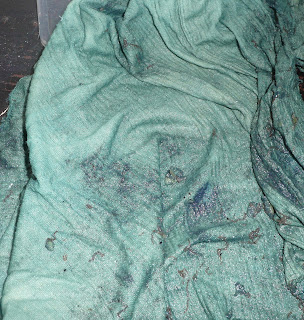 The cotton is going blue.  It came out of the vat looking much greener but had already started to change  by the time I got the gloves off and picked up the camera. . 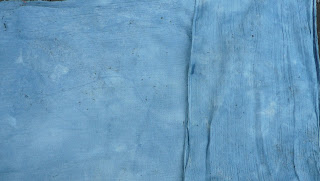 Dyed cotton a little blotchy -which might be caused by me not moving it around enough but  a nice  blue.
Posted by Helen at 11:56 am 18 comments:

Enys ( who for those new to the blog does all the hard work of growing plants) and I are frequently asked if you can grow dye plants in pots. 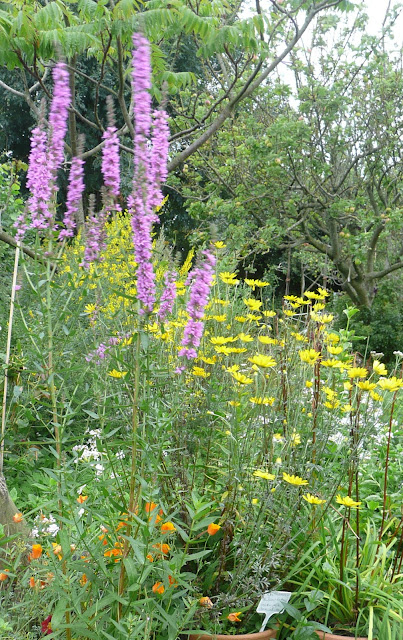 Here are two which are in fact self planted . They both just appeared. in pots - always a good sign that they have found a place where they are happy.  One is Purple Loostrife, Lythrum salicaria and the other  is Dyers Chamomile Anthemis tinctoria . Purple loostrife is a source of  tannin which you can use as a mordant for both cotton and wools.  However purple loostrife does like to be damp so it might be doing so well because we have had such a very wet summer.  In another part of the garden  I have cut Purple loostrife down to dye with and it is rapidly growing back in bush like shape so you might very well get two cuts from it.  The Dyers Chamomile  has been  picked  twice already and is as you can see flourishing . Dyers chamomile gives a golden yellow and if you add iron either as ferrous sulphate or as rusty iron , a lovely soft green

Bees and Butterflies in the Dye Garden 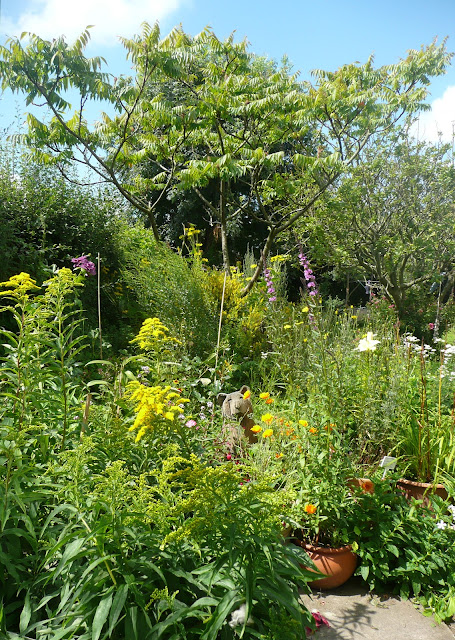 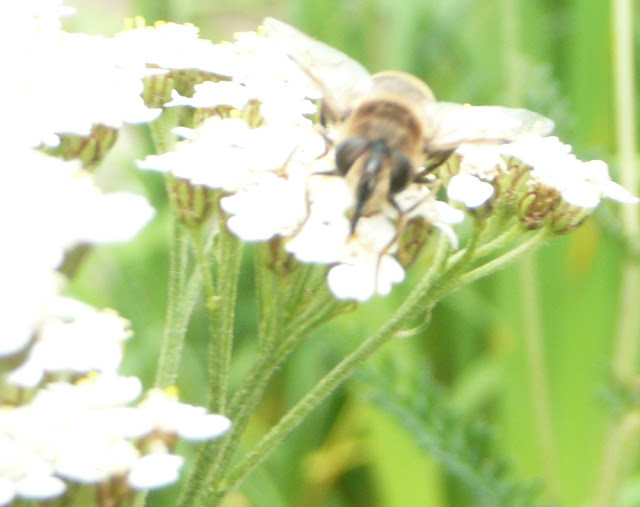 Talk about deadline coming up fast! Not only is Helf Gelf very much on the horizon but so is my regular teaching stint at Malvern Hills Summer School - actually now called the South Worcestershire College. So between making landscapes I am  making samples for the Felt and Fabric Tote Bags ( Thursday  16th of August )  and of course packs). Other workshops are  Postcards which is felt landscapes and machine embroidery   (Wednesday 15th August) and Eco Dyeing. ( Friday 17th August)
These are some of the things I shall be doing. 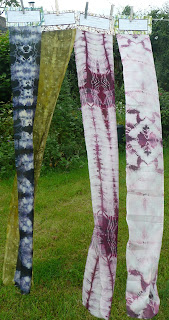 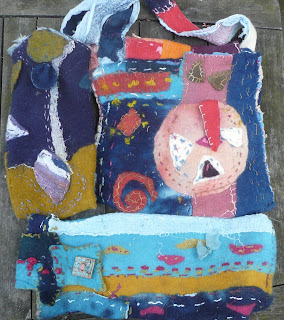 Samples for the Felt and Fabric Tote bags 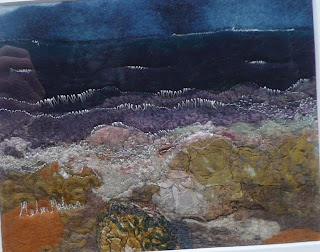 Another picture for Helfa Gelf

Rough Sea 4 naturally dyed felt and just  a tiny bit of machine stitch-unusal for me as there is often  a lot in my picures .   Referring back to my previous  posts on mounts this is in an antique white mount and a silver metallic frame.
Posted by Helen at 9:50 am 2 comments:

When you have finished a picture you then have to get it framed.  This can make all the difference to a picture.  The wrong coloured mount and wrong frame can ruin a picture. One of the things that drives me mad are people who frame all their work in identical frames. Usually bland pale wood . Or  come to think of it even worse in the horrible boxy Ikea frames. Even  worse than that are those poor souls who tell you in triumph. " I have hardly spent anything on framing!  I just go the charity shop find a frame and put my picture in".  And one can only gaze in horror at some poor little piece of textile art stuffed into an incongrous frame nd wilting in front of your eyes. Once you have seen decent framing you really start to notice frames
Posted by Helen at 9:39 pm No comments: