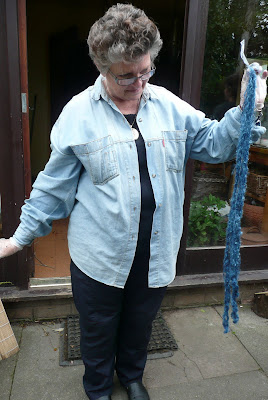 Yesterday I held the last of a series of natural dyeing workshops held in the studio here over the summer. This one was Dyeing the Blues and covered dyeing with a variety of sources of indigotin. I decided to roughly follow the path that dyeing the blues would have taken in history. so we started by picking woad ( Isatis Tinctoria) and the Chinese Woad (Isatis indigotica) which turned out to be covered in lots of green caterpillars happily munching away. We tore the leaves up,having removed the caterpillars, and covered with boiling water. After twenty minutes we squeezed out the leaves and added washing soda to the liquid. I put in a bit too much and the pH was 10. My students energetically beat the liquid and the froth turned an astonishing deep deep blue. I had never had this before. Was it the time of the year? The hard beating? Or the unusually high pH , I usually have a pH of 9). Unfortunately I took few photos. I find it difficult to take photos at workshops as I am always racing around keeping everything running smoothly so there were none of this stage. I added thiourea dioxide to reduce the vat
The next vat was an introduction to a fermentation vat. I had a large one with about 9 litres in which was a madder/bran vat started four day ago. This too produced very dark blue fibres nearly a midnight blue. The indigotin in this vat came from Indigofera Tinctoria.
My students then made a stock solution also with indigotin from Indigofera Tinctoria ready to make a modern vat and we went off for lunch.
After lunch we dyed with the woad vat. This gave a deep blue the deepest colour I have ever had from fresh woad leaves. I have included a photo of the increasing depth of colour from repeated dippings from a previous workshop as a pointof comparison . The woad dyed the equivalent of no 10 ( reading from left to right starting at the top left).

Time seemed to vanish and we rushed around dyeing with what I described a Modern Vat or Chemical Reduction vat, before galloping back out into the garden at high speed at about 2.45 to gather Persicaria Tinctoria ( the Japanese Polygonum Tinctoria). We gathered two armfuls of these stripped off the leaves then all five of us chopped away with scissors. I covered the leaves with water and acetic acid and then kneaded the leaves. We strained the leaves and then I kneaded the leaves again just as I would have kneaded bread and added the resulting liquid to the rest in the bucket. We stuffed in silk, and wools and even one hank of tencel before leaving it to go back to more dyeing indoors. 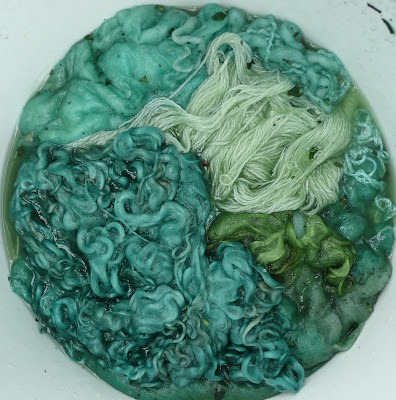 Finally at nearly 4 o clock we found all our fibres in the Persicaria Tinctoria had turned a beautiful turquoise and everyone was pleased and excited (especialy me as this was only the fourth time I had used the fresh leaves to get turquoise with one failure.) Below is a silk cap on the left, handspun tencel yarn ( spun by Maureen) and Teeswater curls on the right.The photo below shows the bucket after dyeing which today has gone a deep blue with grains of stuff on the bottom which I assume is indigotin settling out. 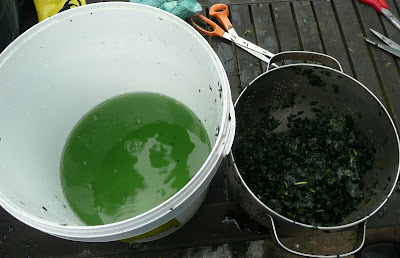 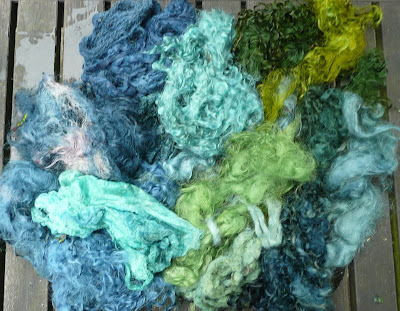 This photo is of all the colours of day. The bright greens were golderod overdyed with indigotin from the woads

The pan below is the Persicaria Tinctoria vat today. 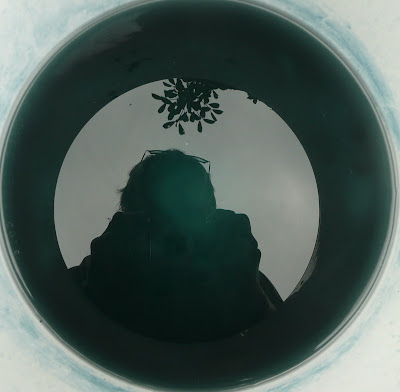 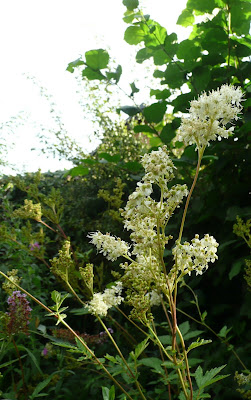 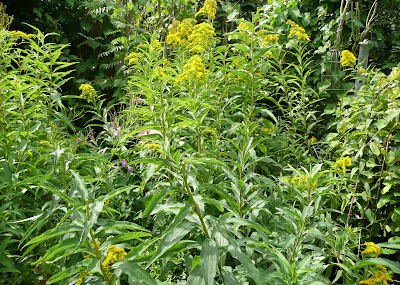 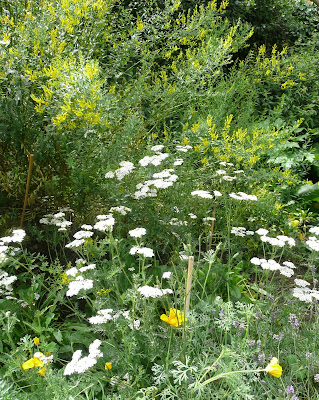 Yarrow with Genista Tinctoria behind and Californian Poppies (not a dye plant to my knowledge) in front
posted by Helen
Yarrow MeadowSweet Golden Rod
All fibres pre mordanted with 8% alum. 7% cream of tartar. Plant material heated slowly overnight with no prior soaking , fibres added which were then heated till no increase in depth of colour. ( 12-24 hours) The Golden Rod was in a stainless steel pan on an electric ring at it lowest setting. The other two were in electric casseroles on low or keep warm settings which keeps the liquid at roughly 80 degrees C so well below boiling. I picked a 100g of yarrow and meadow sweet which have dyed about 50g of wool but the golden rod is a rolling dye bath. I add more flower heads when the resulting colour looks a bit pale and it has now been going for about a week.
Posted by Helen at 6:02 pm 6 comments: Links to this post 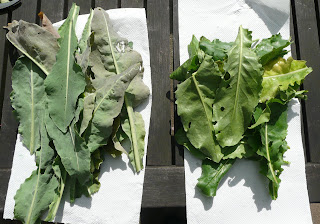 I wrote this blog as I actually did it. So I apologise it if sounds a bit too detailed. I thought I would try it as an experiment as I usually keep notes on my computer anyway.

10.45. I picked 100g of leaves of I. Indigotica and of woad I. Tinctoria . The leaves of chinese woad, I indigotica, on the left are thicker and slightly more bluey in colour than the leaves of I. Tinctoria
I poured one litre of nearly boiling water over the leaves and left to steep for about half an hour (coffee break time!)

I squeezed out the leaves and the I. Isatis on the left, gave a characteristic sherry coloured liquid but with a pink cast. although this has not come out on the photograph. The I. Indigotica, on the right was darker in colour with almost a purplish cast. 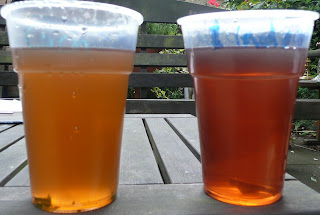 I added 1 tablespoon of washing soda ( sodium carbonate) to each which gave a PH of between 9 and 10 a little higher than I intended. Then I whisked them both for 2 minutes (and did my wrist ache!)
I. Tinctoria went a light green then on beating for 2 minutes a dark green with a slightly blue froth.
I. Indigotica went a bright green followed by very dark green and after 2 minutes of beating the froth had a dark blue cast to it.

The I. Isatis was in a wide bowl and the I indigotica was in a three litre jug so when I squeezed the leaves out this was still very hot ( at about 60 degrees C) while the I. Tinctoria was just tepid.
I added 1/8th teaspoon of Thiourea Dioxide commonly known as spectralite as a deoxygenator to each and left them for half an hour. I did wonder whether the I. Tinctoria might need more being in a wide bowl where the liquid might have absorbed more oxygen. but decided to see what happened.

I decided it was a bit difficult to compare the two vats when they were in such different size bowls which effected the temperature so I transferred both vats into one litre jugs and placed in a big bowl with boiling water in to have them both at the same temperature and added a little more Thiourea Dioxide to compensate for adding oxygen as I transferred them, and left them for 10 minutes or so. The I Tinctoria was at 48 degrees the I. Indigotica was at 42 degrees C.


I added the fibres at 12.40 and left for 20 minutes. as I was interrupted by a phone call!
I removed both and allowed to oxidise for about 20 minutes. As you can see the I Indigotica ( the one on the right ) is a darker blue. 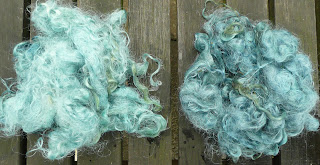 I put half of the fibres back for 5 minutes and both went a bit darker.
The dogs got walked at this point so I returned to my two little vats at 5.00pm adding more hot water to the bowl to warm them up, 25ml of washing soda solution* as the pH had dropped to 8 , and 1/8tsp approx of thiourea dioxide.

* Washing soda solution is made by adding 4 tablespoons of washing soda ( sodium carbonate) to 1 litre of water.
I then added back half again of the previous clump of curls. (pH between 8-9 and temp at 38 degrees C) and left for five minutes removed and oxidised. I went on doing this until the fibres really did not look any darker. You can these results below with I.Tintoria (the ordinary Woad) on top and the I. Indigotica (Chinese Woad) on the bottom. There was still colour in both vats so dyed some more fibres a nice light blue photo not shown as the light was going ! 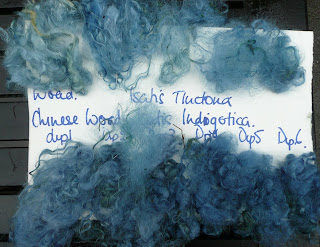 Ps DH (a very supportive and encouraging man) says to all readers of my blog READ THE MACHINE STOPS BY EM FORSTER and prepare for the future . This is the time of the year when I feel almost overwhelmed by the anount of dye in the garden. I have a sense of the dye garden exploding with colour. Dyers greenweed (genista tinctoria is bursting into flower, golden rod (solidago canadensis) is almost in full bloom, There is loads of yarrow ( achilleia miliefolium) and meadow sweet, the dyer's chamomile (anthemis tinctoria)is awash with golden flowers and the dyer knotweed polygonum inctoria and Chinese woad (isatis indogitica )in the new bed are doing really well. The colours are strong and vibrant too.

What is a poor dyer to do? Surprisingly enough during the year the yellows and greens are the colours I most often run out of, for example the green I made from overdying the yellow from dyers chamomile with indigo has already gone into making a bag , ( the one in the middle top). So this year, I thought I would dye a lot especially with the genista and with the golden rod as neither of these seem to give such a good colour after drying. I don't think that weld does either but it is such a strong dye I don't think we realise how much is lost. Sometime ago Kevin from the Online Guild of Weavers Spinners and Dyers generously sent me his method for making an extract from weld so I think I might try this. Then I found myself thinking maybe I would freeze some golden rod as our freezer is seriously underused. I wonder whether anyone has tried this I know Bettina http://woollybits.blogspot.com/ freezes dyers chamomile and India in EcoColour says she freezes a lot so I might try that.
Leena of http://riihivilla.blogspot.com/ I can't seem to be able to work out how to put a name into the blog which you click on and it goes to the site so Iam having to do it the long way round and give the url) has been dyeing with polygonum tinctoria and has used it to dye wool, rather than the silk I used and got a lovely soft blue with a turquoise cast. I think she kneaded the leaves more thoroughly as she seemed to get more dye than I did. She also pointed me to the turkey red website http://turkeyredjournal.com/ which had an article on dyeing with the japanese polygonum which said that the plant was ready when the leaves showed blue spots so maybe some of mine had been picked a little early.
Posted by Helen at 8:32 pm 6 comments: Links to this post