The last Dyes of the season

I have just been harvesting the last of the dye plants from the garden.
Persicaria Tinctoria which had been slightly hit by the recent frost had a lot of dark blue leaves . I harvested these and put them into a kilner jar and into a hot bath where it was heated for about 24 hours . The water in the jar is a deep sherry colour and I will hopefully dye with the result today. 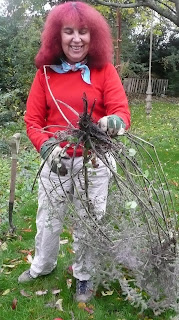 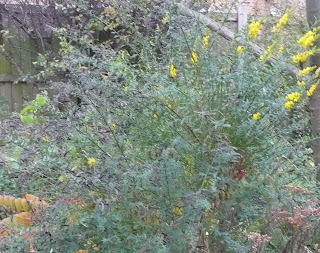 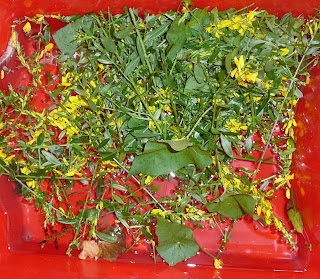 Dyers chamomile and Coreopis tinctoria gave double handfuls which went into little pots ready for a spot of rust dyeing on silk.  Frost had killed the marigolds. Much to my surprise my Genisita tinctoria was in flower so I cut those and put them into a convenient tub that had been collecting rainwater for me. Enys ( pictured above)  dug up the vipers bugloss -Echium vulgare.  Reports form the Natural Dye Online  said that you could get blue from the roots- so at last I  get to try it.  I normally extract the blue from alkenet Alkanna tinctoria  roots with acetone so  I may have to wait a few days to get some.
Posted by Helen at 9:15 am 4 comments: Links to this post

DH and I stuffed the DOG in Kennels and zoomed off down to Dartmoor in Devon to the newly built Duchy Square for Creativity in Princetown ( where the prison is ) in the centre of the moors.  I have moors near me and I am fascinated by  both the similarities and the differences.  Denbigh Moors and Dartmoor North Wales and Devon  respectively feature the same upland bleak look of hills with heather grass and rocks( and sheep)  but Dartmoor has piles of stones called Tors and trees growing on top of stone walls.  and the light is different. Did  I have my camera? Did I heck- I left it on my stall . Now I want to go back because I have gone all painterly and artistic and want to paint it and then do a felt picture.( If you want to see pics of Dartmoor look at Dyeverse)
The reason was a Textile Fair organised by the Duchy Square but very much the  idea and inspiration of Jane Deane  spinner dyer weaver and Reviewer of My Books (and now also a friend) who has a studio there.  It has  a gallery and shop and lots of large light studio's with huge sinks in them and has got lots of artists and crafts people working there.  So DH and I think "good" we can visit Son no 1 in Bristol and son No 2 In Exeter. which are en route. However a variation of Sods law ( if anything can go wrong it will) applied and both sons were off on courses.
People arrived from 10am on the first day which is always a good sign and I met lots of  lovely people many of whom came and said nice things like " You are such a source of inspiration to me " and other equally nice things which made me feel very happy and warm inside.  Gill Burbridge came to see  me wearing the most fabulous nuno felt jacket  and I am now planning to go down to do a two day workshop with her ( staying hopefully with son no 2 although he does not know it yet)  as I tried her's on and it it was fabulous, comfortable, warm, well felted and light and  I want to make me one. Gill makes then from one piece without cutting and stitching something that really appeals  to me. The second day was quieter than the first and people were not such enthusiastic shoppers but Jane had done a good PR job on my inks and I sold quite a few  as well as fibres and kits but not any of my lovely stoles.or picture. 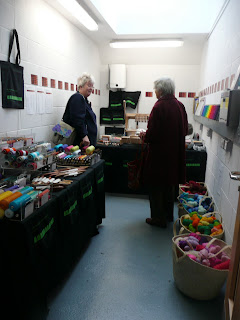 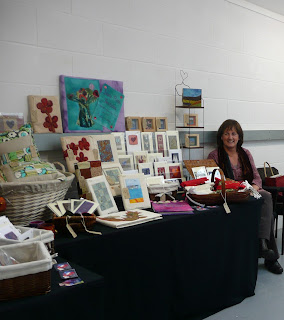 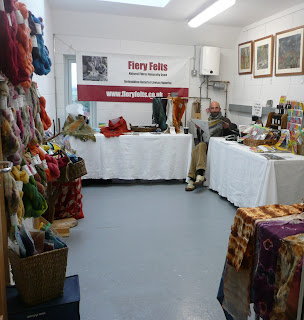 I bounced around the centre taking photos but few are very exciting so I have only posted a few, my lovely next door neighbour who lent me a mirror and then gave it to me as gift and Handweavers stylish studio on the  other side and  my stall  with a happy looking DH who enjoyed the whole stay.
We zoomed back picked up sad DOG who hurtled out of dog prison with every sign of falling hysterically on our necks sobbing "I thought you would never return "so we have decided not to put her into Kennels again.
Now we are having a rest and break while North Wales Suffers a sever weather warning and as I write  rain and wind are pounding down.
Posted by Helen at 7:19 pm 2 comments: Links to this post