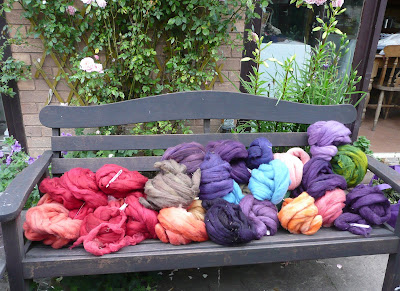 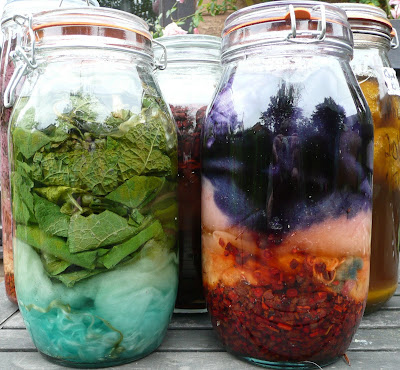 After two weeks of work experience Tara and I had amongst other things dyed 2 kilos of merino, handpainted 1 kilo and 20 silk caps.
New Solar pots are: Madder and Logwood, and Mullein with a copper mordant -made using copper piping and acetic acid. It is this which is dyeing the fibres turquoise at the moment!
Posted by Helen at 8:49 am 7 comments: Links to this post

Work experience and the Woolfest 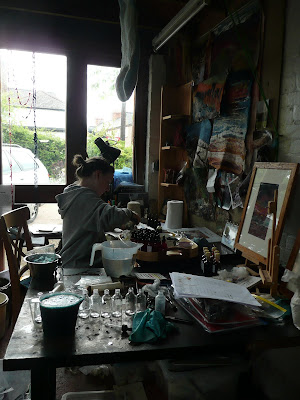 For the next two weeks I have Tara here for Work Experience. The idea is (I think) that Tara gets an introduction to working life as a school girl and I get the use of an extra pair of hands. Tara came to me because her mother (clever woman) brought two of my pictures and emailed asking if I might be interested in having Tara . I asked members of the Online Guild of Weavers Spinners and Dyers what they thought and they on on the whole thought it was a good idea provided I met Tara and liked her (which I did). Most butnot all of them had had a good experience of having someone for work experience.
So
Here is what we did.
I am getting ready for two days of workshop next weekend, the dye garden open to visits ( two next week) and in three weeks time I shall be having a stand at the Woolfest. There are three areas I really need to work on. Inks-I was getting down to just a few bottles. A good range of colours on the 23icron Merino. And my hand spun "Beyond the Twist Yarns". I had 24 different hanks at Wonderwool now I have ten which barely fill my yarn stand. All the knot yarns, , all the multicoloured single yarns, and all the very textured slub yarns have gone and all the Lesley Prior's Devon kid mohair and silk. This leaves me with some teeswater and silk and one of the welsh kid mohair . I am trying to spin for the Woolfest and none of the things I will get Tara to do is to drum card batts for me.
Yesterday Tara wound off 2kilos of Merino into 20hanks. and labelled them, and did the same for about a half a kilo of cashmere and silk and then we made up 5 different dye baths of complex dye mixtures to give red purples,blue purples, violet, terracotta, and reds. After lunch I started a stock check on my stock but did not get beyond the inks which were low. I sold quite a lot at the Natural Dye Day on Saturday and found I had only one green, and no purple . So I made inks and Tara stuck the labels on.
Today we will start to mordant and to get the dye baths ready. This will take up all my electric rings. In the afternoon Enys will be coming round and provided we can get into the garden we will be planting out the Japanese Indigo and the Chinese Woad But as I write this it is raining so I am hoping we will manage it.
Posted by Helen at 8:01 am 2 comments: Links to this post 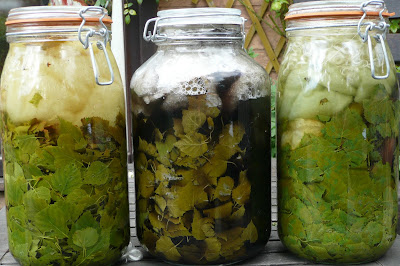 From Left to Right the pots are birch leaves with added alum , rusty nails and copper piping

I have added more pots to my array. This is partly because my dye garden is open to visitors this month and it is something else for them to look at, partly because I am demonstrating and exhibiting at The Natural Dye at Trefriw Woollen Mill Conwy on Saturday June 5th. This is a day of dyeing with indigo and coreposis by me , demonstrating of spinning and felting, talks on dye plants , and solar dyeing demonstration. This leads me onto my pots. When my friend Anne was here (who is demonstrating the spinning) I told her about birch leaves and what a good dye it was. Off we went withthe dogs, and picked birch leaves. We half filled her 4 litre pot with birch leaves topped up with hot water, and then decided to try and add rusty nails as a mordant. DH joyfully pulled rusty nails out of planks from our newly demolished shed, we added them to the birch leaf pot and the water in the pot went black almost immediately, indicating that the leaves were high in tannin and the the iron had reacted with tannin to give grey to black. To the next pot we added a piece of copper piping and a tablespoon of the copper mordant I had made by putting copper piping into acidulated water (made by adding vinegar to water). This used up all the birch leaves we had collected but by this time we felt the pots would clearly illustrate colour modification by the different mordants so when DH next took the dogs off to the woods he picked some more and this time I added alum only to the pot. All of the solar pots had some unmordanted fine prefelt added which I had wetted out and some unmordanted mohair. As sod's law ( what ever can go wrong will go wrong) would have it we had no sun for a few days so yesterday was the first day the alum pot really got going and this morning is quite yellow.

This pot was started on May 5th. On the bottom layer is annatto seeds which I had soaked in vodka for 5 days to extract the dye. I added about 200ml or so of water and onto this I pushed down about a metre of pre-mordanted cotton muslin ( mordanted in 5% alum acetate) and added a tablespoon of a logwood dye bath as well as some logwood chips. This experiment was inspired by the new yahoo group I belong to, sustainabledyepractice, where we are investigating dyes month by month. The first one in May was Annatto and the second starting in June is Brazilwood. So yesterday I stuffed down some more premordanted muslin and added some brazilwood chips to the top and little water. It will be fun to see what has happened by the end of the summer!

A few people have asked me how to make solar pots. The most usual way I do it is to start with a glass jar, put in a generous handful of dye stuff if dried and about half the jar if fresh, add premordanted fibres, top up with warm water and leave in a sunny place. You can add unmordanted fibres and put in some mordant solution which is mostly what my friend Anne does. I leave my pots all summer befor emptying them out and seeing what has happened.
Posted by Helen at 8:24 am 7 comments: Links to this post