Dyes from the Winter Garden

We have had, so far, a very mild winter and as I wandered around the dye garden on a very mild sunny day I was astonished at how many dye plants were either still  in flower or doing well.

I decided to dye with them all:
starting with Chinese Woad ( Isatis indigotica) .This was last picked in November so all this growth has been since then so I was not sure how much blue there would be in the leaves .

I picked all the leaves, weighing 220 g and ripped them all roughly , poured over 2 kettlesful of boiling water and left to steep.  You can see the colour after about 20 minutes, this is  the precursor to Indigotin.
Then I added 1 tablespoon of washing soda ( sodium carbonate)You can see that the water is now a murky green

Then I started to beat to areate the liquid . This converts the precursor to indigotin to indigotin which being insoluble will precipitate  out. You usually but not aways will see the froth turning blue . It doe slook bluey here but not marketedly so.
Then I added 1 dessert spoon of thiourea dioxide which removed the oxygen so that the insoluble blue indigotin would convert to its soluble form indigo white.   At the sme time I heated the little vat till it was 50 degrees C -the optimum temperature for dyeing wool . The pH was 9.
In the picture below you can see the fully reduced vat with some pale  blue undissolved indigo on the surface showing that there is some blue but perhaps not a lot.

I enterd about 50 g of dry 18,5 micron merino and silk.  Here you can see it soaking in the vat.
Here the fibres are hung to drip and oxidise from yellow to blue.
I tried dipping the  fibre again to get a deeper blue but there was little change in the colour so then I put in some  weld dyed fibres - dyed with the weld I found growing in Conwy in November 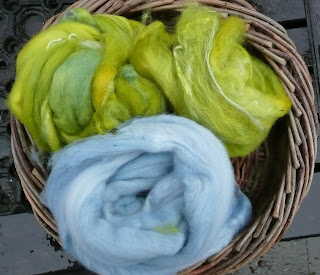 Here is the result. About 80g of dyed fibres. Not as much as you would  probably get if the leaves had growing durign sunny months  but still nice  to have especially in the bleak winter landscapes with grey skies and drizzling rain.
The rest of the dyes are cooking as I write.
Posted by Helen at 4:24 pm 9 comments: Links to this post 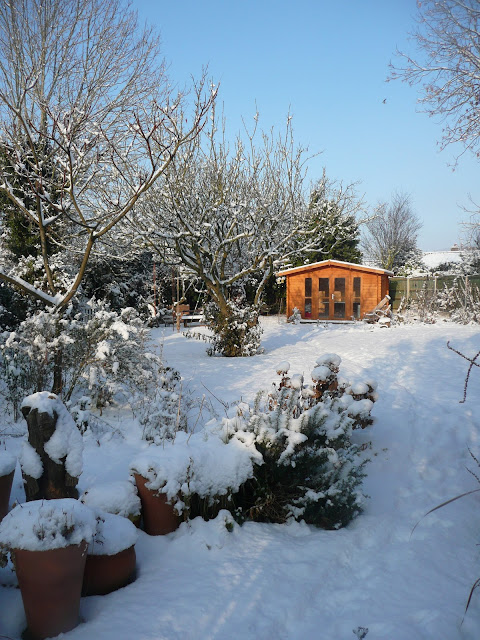 Merry Christmas and a Happy New year to all my followers, readers and  friends.
Posted by Helen at 6:09 pm 1 comment: Links to this post 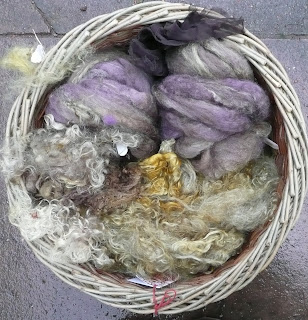 Sometmes natural dyes can prove to be very difficult to photograph.  Once or twice I have run into real problems getting the colour of the dye into the camera.  A Logwood dark blue will never come out the colour I see it as.  Today I have dyed some wonderful lime greens  and purples with Logwood and Persian berries but no matter how I photograph it it comes out grey with flashes of purple..  Oddly enough the Persian berries greens look grey in artifical light too  See for yourself-and you will have to take my word for it that this  does not do justice to the colours at all what  you see as grey on the screen is  a lovely green.
Posted by Helen at 10:31 pm 7 comments: Links to this post 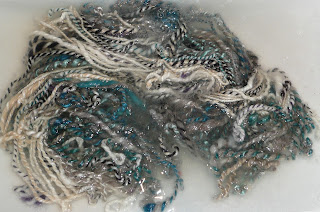 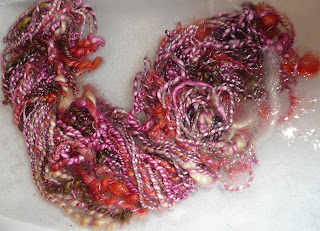 Now the evenings are long and dark, the wind is howling and rain is slashing agaisnt the window I am having a lovely time sitting  at my wheel playing with colour and texture.  Quite suddenly I can't  get enough and look forward every evening to  to the time when I can sit down and spin.  This is when I rnew my stock of art yarns  which have  been selling like hot cakes  but I do have a few up on my website.    Here I couldn't   resist a photo of the yarns being washed.  I thought it showed them off quite well!  I wash the  yarn for a very short time in very hot water with a little of my lovely  organic shampoo so the yarn hangs nice and straight and it firms up soft fibres a bit.
Of course every scrap of fibre is naturally dyed.
Posted by Helen at 9:51 pm 2 comments: Links to this post

Labels: Beyond the Twist Yarns

I love multicoloured fibres and fabrics and although I can get this effect with the extracts of natural dyes  I am rather pleased  to find along the  way of experimenting with eco dyeing that I had found another method of getting a painted  effect.
I have been solar dyeing for the last three or four years with large kilner jars and have been enjoying stuffing fibres and dyes into large pots and seeing the result and opening a pot is rather like opening a Christmas present.   But of course solar dyeing here is only an option in the summer so now Iam suffering form withdrawal symptoms. I decided instead  to experiment with ecodyeing in kilner jars using one source of heat.
Here are the three pots I produced for a demonstration at Trefriw Christmas Textile Market .They all fit into one pan and although I stuff different things into each one they  take about 50gs of fibre, a couple of silk caps, handfuls of mohair and pieces of silk for example.  I usually stuff in silk cocoons and carrier rods too. This is an ideal method for a project as the different fibres all go together and in one pot you can get a lot of variation.  My photo of the results of  the madder logwood and persian berries pot  is not brilliant because there are two different silk caps one from the bottomof the pot and one from the top. This is also  a lovely technique for nunofelt as you can dye both the silk and the fibres together but I plan -as I am now into my spinning season  (long dark cold nights and a woodburner) to spin quite  lot of these into yummy art yarns. :) 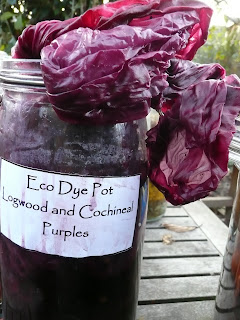 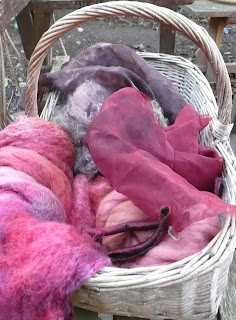 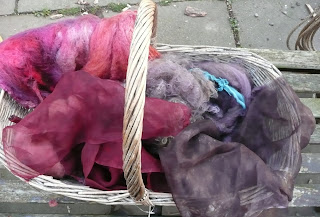 I haven't opened them all yet - I have just started so will post the results of these pots when the fibres are out and dried.  But in logwood and cochineal  pot I have pulled out some of the silk so you can see the rich colours .
The last pot you can see was the demopot form Trefriw,.  Here I poured in soaked out madder Cochineal and Persan berries over the fibres and a long piece of silk.  I haven't heated this one yet so this gives me something to look forward to.

Posted by Helen at 5:11 pm 2 comments: Links to this post