A Working Studio,Organised Chaos or What the BBC saw! 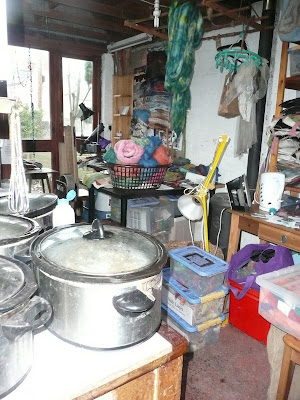 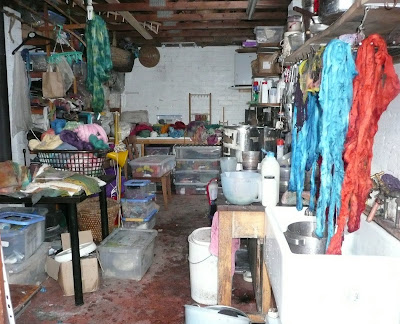 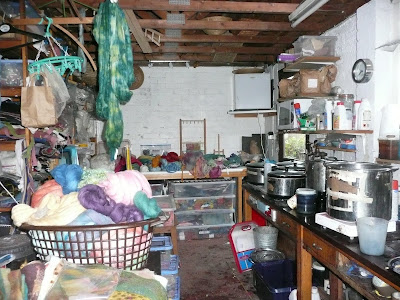 Dot Lumb in her blog Fibre 2 Fabric mentioned the state of her studio saying that the place that had been immaculate two years ago was now almost too full to move in. It set me thinking about my studio. One fellow artist just says "Oh my God" whenever he sees it Early on in the week I taught 7 people Felt Beyond the Boundaries-incidentally one of favourite workshops- in a beautiful pottery studio ( Ceri Pottery) high in the hills near Newtown in Powys. Her large studio with two pottery wheels and lots of working space was immaculate and really put mine to shame. My worse enemy could not describe mine as immaculate and here it is in all its organised chaos glory with photos from the doors at either end. This is what the BBC saw when they came interested in running a children programme .
I thought it would be fascinating to have a show of working places. What does your studio look like?
Mine I realise is going to have a face lift before the Open Studio event later this year Helfa Gelf. sigh.When?I don't know and where will everything go while I wash down the walls and paint? I know it needs to be done and I will feel better for it but ..............................arrgh!
Posted by Helen at 8:21 am 5 comments: Links to this post

Spring has come to the Dye Garden 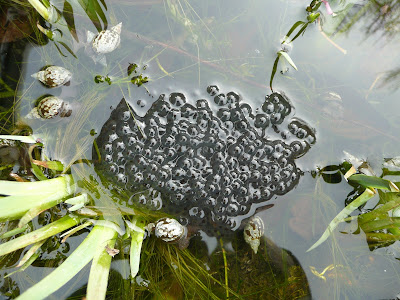 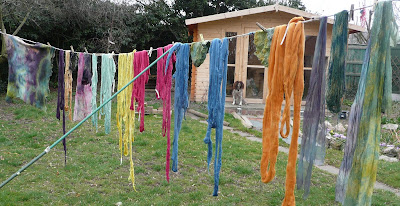 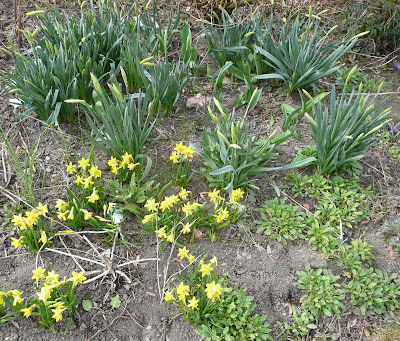 As well as crocuses miniature daffs, catkins and the fabulous delicate dwarf irises spring means other things to the dyer! Yesterday for example I was able to work in the studio without having to light my wood burner, I could hang my fibres to dry on the line and finally something , which although it has nothing to do with dyeing , excited DH and I somewhat -we have frog/toad spawn (I not sure which) in our little pond. Last night we heard the gently croaking call of an amphibian-. The little pond had been around for four or five years and over the last two we have spotted an increasing number of frogs and toad although they are very shy. Last summer when we had been away for a week they had obviously colonised the pond and I saw a frog squatting on a lily pad but sadly the pond which is in our battered flagged patio (all the flags are uneven) is probably too near the house for them to lounge around at their ease. So we are delighted to see our spawn .
Other nice things happened. Last year my studio was open for an Open Art Studio event Helfa Gelf ( meaning Treasure Hunt) .The organisers ran a raffle, the winner having £500 to spend on art. The winner has chosen four artists who she wants to look at in more detail and she chose me as one. She came out yesterday and to have a look although she wanted either something like Tree against a Red Hill ( which you can see on my website) or a Waterfall both of which I have sold.

Then the BBC rang up to see if I was interested in a (very) cameo appearance dyeing with children on an children's programme.

On the dyeing front I am dyeing like a women possessed as I have so many workshops coming up for which I always provide all the materials in natural dyes. Increasingly in recent years I have been booked up by groups and this year I am really busy . On Monday for example I am teaching a small group of artists in mid Wales a workshop of mine called Felt beyond the Boundaries. A week today one I am running one called Felt Collars, here for the first time I will be teaching the students to felt a fine felt collar with lacey edges using the incredibly fine ultra fine 15 micron merino. Dyeing this without felting that been a challenge! Up and coming is another Felt beyond the Boundary for a group on the LLeyn Peninsular and Felt and Fabric Tote bags and Asymmetrical Bags in Gloucester both in May. In between is Wonderwool so the dye pots are constantly on the go and you can see why being able to hang stuff upon the line outside is such a relief.

The dark pink fibres on the line are cochineal extracted from the whole bugs similar to the recipe described by Leena on her fantastic blog on cochineal which you can find here. It saves the grinding but I am not sure that it gives such a bright pinky red colour as does grinding the cochineal bugs and soaking with cream of tartar. This is the method I have used in the past and comes from Trudy Von Stralen's book Indigo Madder and Marigold. I plan to grind some today but it will be Tuesday before I can dye with it

As revenge for me saying Spring has come the changeable British weather has now clamped down with a hill mist and heavy rain. Oh well at least the frogs and toads will be happy as the pond fills up.
Posted by Helen at 8:22 am 7 comments: Links to this post

I was checking back on some old posts and was amazed how much I wrote in 2007 and feel somewhat abashed at the contrast with now. I am dyeing most of the time and making inks ( which are selling very well) but don't think to blog about what has become routine(ish).
Kev, a fellow member of the members of the Online guild of Weavers Spinners and Dyers, sent me some of his own weld extract which he had made himself, I am not sure when but probably about 18 months ago. Here is his website with the information on how to do it. A couple of weeks getting ready for a couple of big workshops I needed some greens in a bit of hurry and realised I had still got Kev's extract. You know what it is like when someone sends you something a bit special you put it on one side to use for something special. Then, months later, when you are tidying up you find it again. So this time I thought I will use it instead of waiting for this mythical special event!

He had sent me a small pot of the weld extract- but did I weigh it -did I heck :( . I tipped the small hard dull yellowy brown pieces ( probably about 20g or so) into a small jug and poured over hot water. If I had checked Kev's website I would have seen he said to dissolve it in ammonia but dissolving it in hot water worked well although it took half an hour or so. I poured the resulting liquid into a slow cooker, topped up with water and added 200g of merino tops mordanted in 8%alum 7%cream of tartar. See here for more about mordanting .
The fibres came out a bright yellow but I added a drop of ammonia-if I do not when the wool used in felting the fibres go a bright floresecent yellow with the pH of the soap. 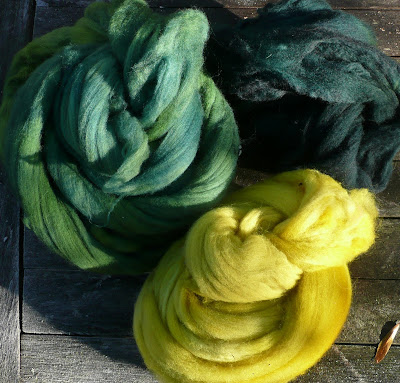 rinsed the fibres, partially dried them and then 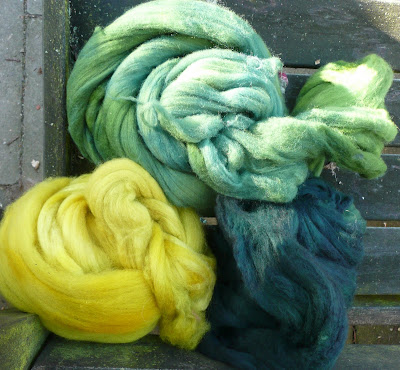 immersed into an indigo vat . Look at the absolutely gorgeous green in the top right of the top photo.
Altogether the weld extract dyed 600g of merino tops in strong to pale yellow and overdyed with indigo I got some yummy greens .
Thank you Kev - this was infinitely better than attacking my pile of dried weld which needs to be chopped up outside as it make such a mess.
Posted by Helen at 8:59 pm 10 comments: Links to this post