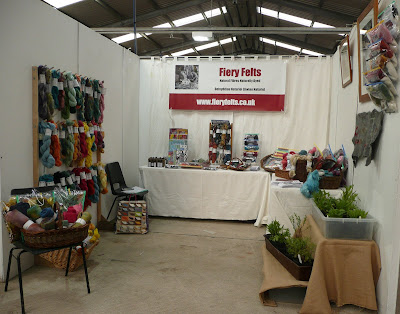 My stall: I am better pleased with this year than last but you still have to contend with the feeling you are setting up inside a shoebox. Sales were okay-just- but odd. Saturday was dreadful and I took most of my money on Sunday afternoon. 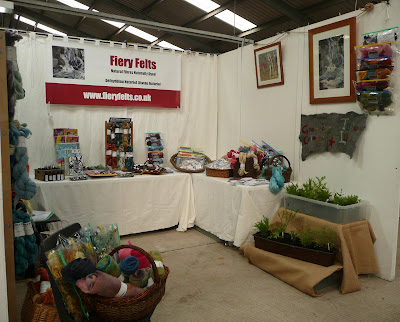 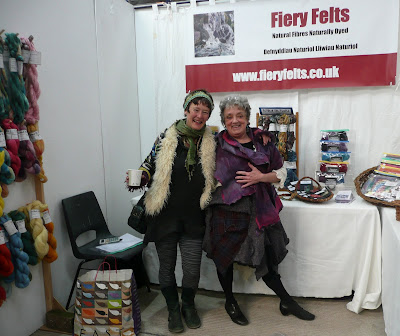 I am on the right and Carys is on the left. Carys is one of two who make the most fabulous unusual and interesting clothes from recycled garments , although they say they are upcycled. Below is me and Hayley the other one of the two girls -snapped by Enys when I wasn't looking. 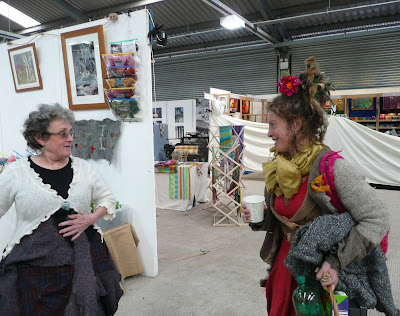 You can find Cary's and Hayley's work here and here Every year Enys and I ransack their stall. Enys bought two summer dresses but I brought the cream top with a bustle to go with the dress I bought last year. It is great fun and of the things I most enjoy about Wonderwool 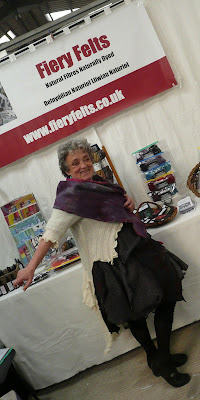 I am sure why this photo is at an angle. Enys this one is down to you! It shows off my bustle cardigan. I just love the quirkiness of these clothes:) 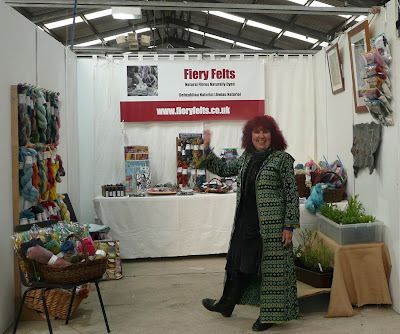 Here is Enys but wearing her gorgeous coat over her dress so you can't see it! 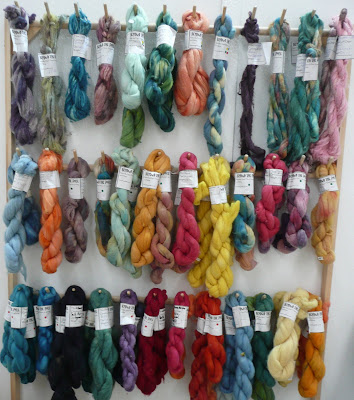 and my fibres.
What did I sell? Well bits of everything but what thrilled me to my heart is lots of my new Beyond the Twist yarns . One customer said there was nothing like them elsewhere in the 150 stalls.Very heart warming and my favourite customer moment. I sold lots of inks too which as they are are very much my babies I feel really thrilled about. However sales were overall poor. I was not alone with this . Will I go back next year? Not sure.
Posted by Helen at 7:49 pm 11 comments: Links to this post

Earlier on this year Isabella Whitworth , sent me 100g of cochineal from Lanzarote, one of the Canary Islands, where efforts are being made by the Milana Association. to revive the cochineal industry which originally started in 1835. Lanzarote was one of the first places that successfully grew the cochineal bug outside South America. and certainly you see the cactus that is host for the bug everywhere in Lanzarote and I spent one very frustrating day about ten years ago trying to track down cochineal without success.
The producers want to know how good the cochineal is so I volunteered to try it out. Recently I have been experimenting with different ways to dye cochineal. I have tried extracting the colour from the whole bugs by boiling in distilled water but in the end I reverted back to the way I have been doing it for a while which I found originally in Trudy Von Stralen's book "Indigo Madder and Marigold". ( Still one of the best introductions to natural dyeing around I think) . For me with soft water this seems to give me the best colour, but if you have hard water you might want to use distilled to extract the dye as cochineal does not like hard water.
So I ground 50g of cochineal bugs in a coffee grinder kept for that purpose. Trudy Von Stralen says to grind it till it is like flour and I do grind it several times. The photo looks quite gritty and grainy but in fact the fine 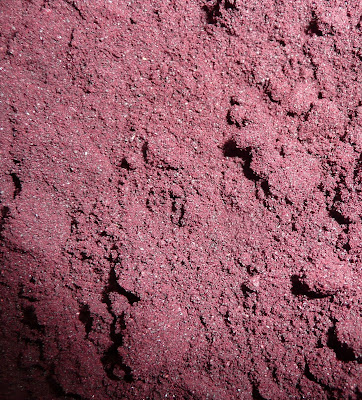 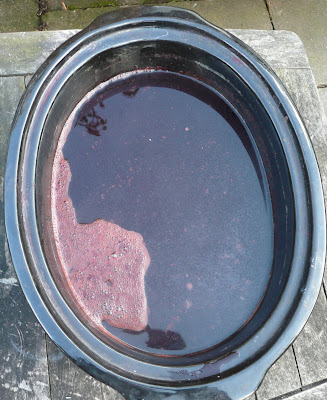 powder has clumped a bit.
I put the ground cochineal into soak with a teaspoon of cream of tartar and left it to soak for 24 hours. Then I heated it- I used an electric casserole on the low heat so it takes about four hours to come to the boil and then boiled for about an hour and left to cool overnight.
At the same time I soaked my fibres overnight before mordanting them in 12% alum and 5% cream of tartar. (For more information on mordanting look here.)
I added a 170g of 23 micron South African Merino tops , the fibre I use in my felting and for many of my workshops. This I heated on low till it simmered and let it simmer for about an hour. Both of the South American Dyes, cochineal and log wood, are the exception to my rule of low temperature dyeing as they fix better if simmered. The fibres were then cooled rinsed and dried. I used up the exhaust dyeing more merino, a 100g of tussah silk and teeswater. Altogether the 50g of cochineal dyed 970g of fibre paler and paler colours The first colour as you can see 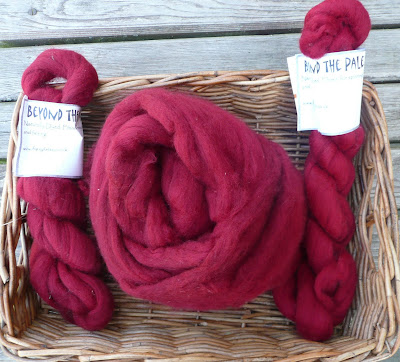 from the comparison photo was as good as my usual cochineal. 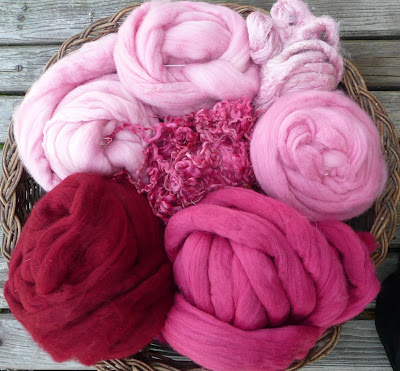 It will be really good to have cochineal from a nearby and known source and with a lower carbon foot print too for us in Europe. I know that cochineal production gives an income to poor Peruvian farmers but I do like to know where my dyes come from and whether workers have been paid well for their labour too.

I still have 50 g left so now I plan to play around with the mordants such as iron and oxalic acid. Cochineal is polychromatic and responds to different mordants givng purples grey and pinks. The best book for this is Fred Gerber's self published classic booklet Cochineal. A mine of information but very hard to get hold of.

I have just been given this link to the Association Milana
Posted by Helen at 7:58 am 12 comments: Links to this post 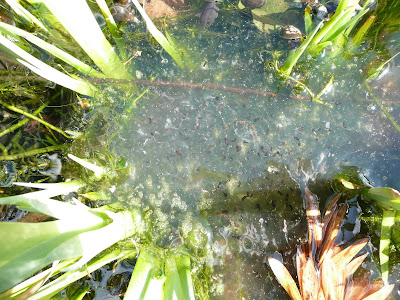 The frog spawn is developing fast. Now you can see heads and tails.
Enys and I pottered around the dye garden looking to see what is coming up, what needs to be done and what I want. Basically loads of blue, so woad (I.Tinctoria), chinese woad (I. I ndigotica) and Persicaria Tinctoria. Then I want lots of Dyers Chamomile ( Anthemis Tinctoria) and Coreopis Tinctoria as these go into my dye kits and the latter also makes my orange ink. Genista Tinctoria only seems to last two or three years, so this year we will have to plant some more. This year I only have one self seeded weld so I hope I find lots of wild weld! DG is going to dig over a weedy spot today so may I will sprinkle weld seeds there in the hope I will get plenty next year. I love cosmos too and holly hocks even though I rarely use then for dyeing-too pretty! This drives Enys mad as she would like to see me doing more experimental dyeing-so would I but production dyeing for the workshops and craft fairs (and for my pictures) has to come first. We will plant the black violas in the pots too so pretty even if the colour is fugitive. All the other plants seem to be doing quite well although with having had so cold winter and spring they are slow.No sign of golden rod yet, the iris pseudocorus is just beginning to sprout, buds are swelling on the rhus typhinus and a few madder spouts in one or two places. Lythrum salicaria looks totally dormant at the moment but indestructible yarrow is looking healthy. No sign of ladies bedstraw ( galium varum) however dyers chamomile and dyers coreopsis are both starting to sprout form the base. Goodee!
Posted by Helen at 10:55 pm 3 comments: Links to this post

Review of a new Dye Book 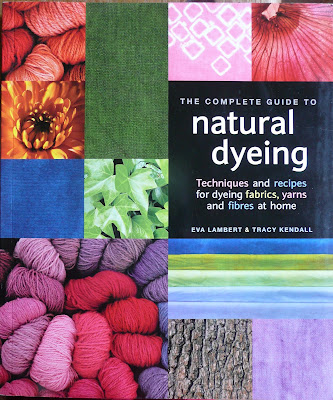 The Complete Guide to Natural Dyeing
Techniques and Recipes for dyeing fabrics,yarns and fibres at home
Eva Lambert and Tracy Kendal
Published by Search Press ISBN 1-84448-527-7


When Amazon first contacted me to tell me there was a new dye book about to be published my first reaction was “ Oh no not another one” as this will be the third in so many years. However not able to resist a dye book I have now added it to my growing collection. The first impact is colour-loads of glorious colour right from the word go -as the very first pages are pictures of samples of dyed fabrics with the page number of where to find how to dye that colour. In the first chapter there are photo's of quite outstanding fabrics by artists such as Isabella Whitworth whose fabulous scarves are shown and Kimberly Baxter Packwood's compost dyed fabrics. These would inspire anybody to want to try natural dyeing.

The book is very easy to use, clearly laid out and the instructions are good. I love the addition of colour theory, the emphasis on the importance of record keeping as well as the really excellent introduction to tie dying, batik and other resist techniques. The dye recipes are good too although I found myself wondering if you really could simmer water at 60 degrees C . Criticisms? Well there are more than a few- it seems odd to me that a book describing itself as the complete guide to natural dyeing should have nothing in it about the extracts of natural dyes. For example Eva Lambert describes at some length how to random dye yarn in different dye pots a laborious process of tying, un-tying dipping into different dye pots that led me more than ten years ago to greet the appearance of the extract dyes , which allow you to hand paint fibres, with enthusiasm. As I read through the book I also went backwards and forwards in puzzlement as nowhere could I find a difference in mordant recipes for protein and cellulose fibres whether as yarn or as cloth. This I don't understand as alum bonds to protein fibres in an acid environment, to cellulose in an alkaline. The chapters on indigo dyeing is comprehensive,and the picture of all the different fabrics and the different way they have take up indigo quite superb, but the chemistry of indigo dyeing is not fully understood. I am intrigued by the addition of salt to an indigo vat-something Sandberg also does- but I do not like the heavy use of caustic soda( sodium hydroxide) in the indigo vats throughout.

I found the lack of a bibliography more than a little surprising and while I really appreciated the down to earth unfussed approach I also found having the health and safety chapter at the end disconcerting. That said the vibrancy of the colours and the clarity of the instructions makes this book very definitely the best of the new books published in recent years and will start many an eager dyer off on a journey of discovery , inspire others to experiment and me … I am off to try putting salt in an indigo vat something I have never got round to trying.

(if you want to read another review of this book go here for Debbie Bamford's take on the book).

Posted by Helen at 8:43 am No comments: Links to this post