Visits to the dye garden, the BBC and Hopi Red Dye Plant

Last night DH said with a huge sigh of relief.  " Good! We can have a lie in tomorrow" This is because over the last few days we have had a textile group from Iceland visiting the dye garden and having a two hour workshop in the summer house and then two days later the BBC came to film the dye garden and what the director insisted on calling the " Dye Lady" for a Children's science programme called Nina and the Neurones.   Hence DH's  sigh of relief as it is he who rushes around mowing the lawn and setting up tables as well as removing dog particularly  from the filming day  (Because of  unwanted woofing)  while I work hard but get all the glory.  I was too  busy to take many photos  but I have put one up of the washing line. Everything on this line was dyed using either plants in the garden or if not quite that by plant material that I also grow. (Except I realised belatedly the red on the extreme left had some cochineal in).   This was in response to the BBC wanting a rainbow of colours on the line and was filmed a lot so it was worth the work. The yellows are Rhubarb root,Rheum spp, Gensita tinctoria and Tansy Tanacetum vulgare . The greens are Genista tinctoria and woad  Isatis tinctoria.  The blues are either woad Isatis tinctoria  or Persicaria tinctoria (which also dyed the blue silks) . The mucky greens are a patchy pale indigo overdyed in rhubarb root. The really dark almost black fibre is somewhat  surprisingly alkanet which I left on too high a heat so it boiled.( This is following extraction of the dye in alkanet by acetone) . The fabrics are silks dyed as solar dyed bundles . 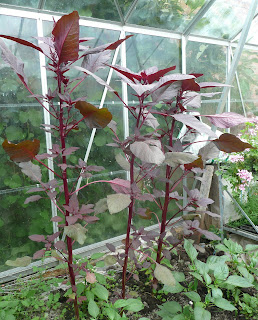 Well I am  here typing, because  while DH is snoozing peacefully down stairs with dog,  I am upstairs in my office having -and this is sod's law- woken up early! So I thought I would share with you my experiments with hopi red dye plant. Amaranthus .whatsit I have been told by a friendly comment that this is A. cruentus x A. powellii,which is just as well as every time I ask Enys she looks vague!
Enys tried to grow this two years ago,  The seeds did not germinate so she threw the compost onto the greenhouse floor in disgust.  The following year she noticed she had lots of  little red plants growing on the green house floor. So she planted loads in my garden and in her own and in the green house.
When it came to dye with them I could find out very little.  None of my dye books -even the one Enys bought back from the USA on native North American Dye Plants contains any information beyond the fact that the Hopi Indians used it for dyeing corn in ceremonies.  A quick search on Google was not much help either resulting only in  that the Aztecs also used it in some ceremonies around blood. 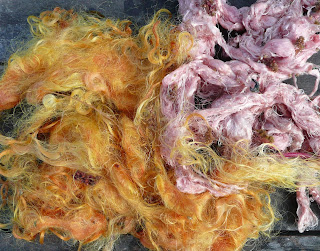 So I picked a large handful of leaves and flowers chopped them up covered with water and added some pre-mordanted silk and teeswater fleece and heated in a slow cooker.   The teeswater went orange and the silk pinks as you can see but the pink washed out.  I added some  more fibres to the  dye bath and everything went a deep vivid pink.  About an hour of heating it all went orange and then another hour ) the colour had almost  gone and all I was  left with was a beige.
Aha! I  thought to my self,  this plant is a candidate for long slow dyeing , along with red cabbage and others where the dye seems to be destroyed by heat. (the only information I could gather was that the dyes are anthocynanins).

I had a friend here for the afternoon who often gets pressed into helping me and she suggested that we split the plant.  So we made up three solar  pots one of leaves, of stalks and one of flowers.
These are now sitting  in my sunny place waiting for some really hot sun to get going.  All the pots have now dyed the fibres a deep pink.