Being ill and the importance of craft/art

Posted by Helen on the 1st of January ( but started on the 23rd)
I have been ill, unfortunately quite seriously ill. First I had week in bed after one trip to A & E and to the out of hours doctors service. with aching limbs and a high temperature while DH bought me beef tea which was all I could eat/drink and which has done wonders for my figure, I am now a new slimmed down smaller me.

However when feeling better I sat beside a roaring log fire made by loving DH and rediscovered my old love affair with crochet.

I used to do loads of free form crochet which I always think is painting with stitch, and had a tunic "Fire in the Rain Forest" accepted by the Millennium touring exhibition of the Weavers Spinner s and Dyers in 2000. Not many people saw it 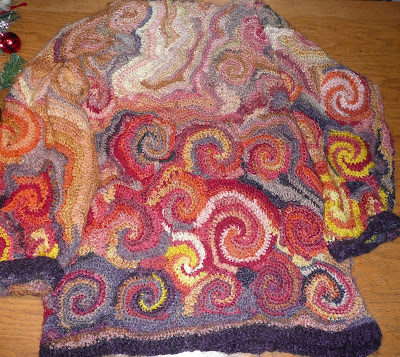 as for some reason the way they displayed it all sorts of little ends appeared and it came back in disgrace. After a few ends were sown in again it has been fine and much worn by DH . It is hand spun Wensleydale, silk, mohair and of course all naturally dyed! My inspiration for free form is always Silvia Cosh and James Walters Crochet Workbook published by Batsford, a very much cherished possession. It was the first craft book I ever bought ( gosh! that does take me back!) and from it I learnt a lot about design , planning a project as well as about free form crochet. I also have her sweater book and made my self the Celtic jacket from hand spun naturally dyed shetland spun long draw ( which I also took to A&E as I was feeling so cold).

My crafts have made a difference to how I coped . Much to the ambulance crew amusement I took Dominque Cardon Natural Dyes with me and sat in a wheelchair in the waiting room for my results reading all about cochineal and then about mollusk purple.

First of all I crocheted wrist warmers for my sister in law who has a poorly wrist which after two ops is now giving her problems with arthritis . The lovely multicoloured dyed yarn, and white silk and linen yarn was spun by Anne and the others were her dyed rovings. I bought all these from her at the Artisan Market. 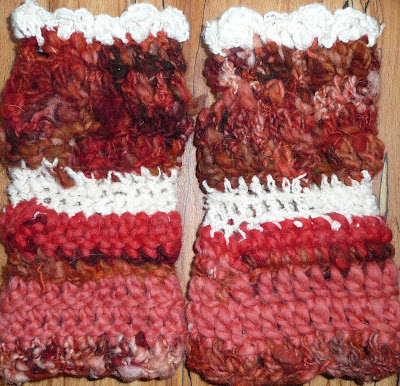 Now with the bit firmly between my teeth I investigated my stash. DH had requested a felt beany but was prepared to accept a crocheted one in lieu so off I set off working out a beany . I soon discovered that I needed to spin a little extra yarn so my Lendrum was installed in a cosy corner by the fire and I spun my lovely teeswater in cochineal over dyed in indigo all curly and then a dive into my stash gave me some hand painted Shetland tops in cochineal and logwood for the ply. At this stage I was very wheezy and unable to even walk comfortably upstairs so I was surprised at how my breathing improved after a couple of hours gentle spinning while listening to the Play on radio 4 ( a very good one). My health then nose dived down and I ended up in hospital a medical mystery on Boxing day. After investigations for blood clots on the lung 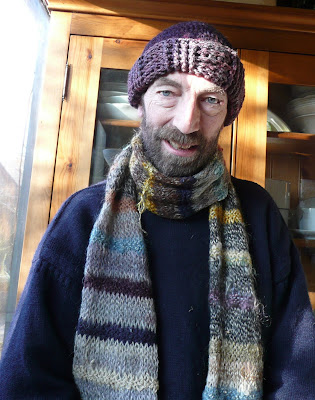 I was found to have an area of collapsed lung with pneumonia and also had pleurisy. My consultant-quite wonderful- rushed into the ward yesterday morning saying before I say anything give me your email address I have a friend who is interested in what you do! Then she told me I could go home but back in the new year for further investigations. I have to take it easy for six weeks :(

While I was on the ward I read more of Dominique Cardon and made notes for a day dyeing with cochineal which I think will be great fun to do as she has lots of different recipes which sound interesting. Then every now and again I picked up my crochet. The poor lady opposite, confined to bed, was very interested and asked what I was doing and before long all the patients on the ward were all involved as we discussed colours and decided on a rib to finish it and they encouraged me to produce a flower on the side when finished. Some of them tried it on and I felt very pleased with how it came out- especially considering how it been done! It looks more like a cloche hat than a beany This was definitely a cooperative hat with inputs from five people-great fun. 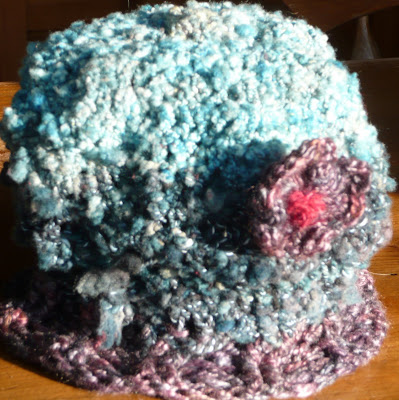 Incidentally this was the NHS at it's best. I was seen by a medical consultant about 8pm on Boxing day, the nurses despite being very busy were unfailingly pleasant and friendly and informative. They worked very hard. A bed was often stripped cleaned and made up again with a new patient installed within 45 minutes of being vacated. The respiratory ward where I was was spotless. As Glan Clwyd Hospital faces East towards the Clwydian range and I was by the window on the fourth floor we watched two magnificent sunrises. The first of which the sun rose looking so like a orange you felt it could be plucked from the sky and eaten! The second it was so brilliant you could not look directly at it.

Finally I want to welcome the new followers to my blog and finally to wish you a happy healthy year full of interesting textiles and of course natural dyeing.

More on the Artisan Market , Mittens and Stoles

Anne wearing one of my stoles and looking pensive

Posted by Helen
One of the features of the Artisan Market was my friend Anne, one of the two hand spinners at the mill, ( the other is Wendy) and who decided to model my turquoise and silk fine felt stole. She started off just seeing what it felt like and as the day wore on she got more and more enamoured of it. When a customer said she liked it and on being told it was for sale asked to try it on Anne's face was a study in dismay! She was wearing a lovely jacket in a very soft muted turquoise-unfortunately in the only photo of her that I have it looks grey, with which the stole looked fantastic. By the end of the weekend she had decided to buy it and I had two commissions to make one as a result of people seeing her wearing it. All three have had to promise to lend their stoles back to me as they are needed as samples for the biannual summer school of weavers, spinners and dyers, where I am teaching Felt Stoles. Incidentally Anne fastened the stole with a fused seaglass brooch I had bought back from the Harbour Gallery on Jersey. I bought 4 now of course I wish I had got more as they compliment the fine wool of the stole.

These are someof my fine Felt mittens , which just as the stoles are made from ultrafine 18.5micron merino and silk. These are now for sale on my website . My favourites are the big multicoloured one so if they don't sell I shall shrink one down to fit my hands and let DH who was a model for the large size choose another so in a way I don't want to sell them but on the other hand I might as well. I loved making these and I have to confess I rather proud of how light and fine I managed to make them. The mittens even the large ones are under 50g in weight for the pair. The 18.5 micron merino is so lovely to felt with. 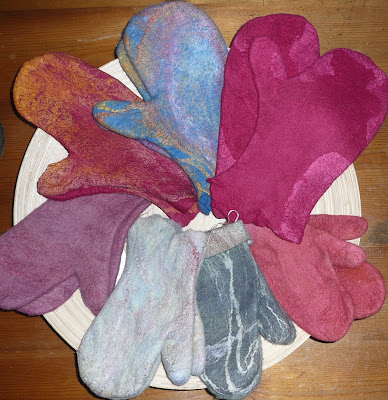 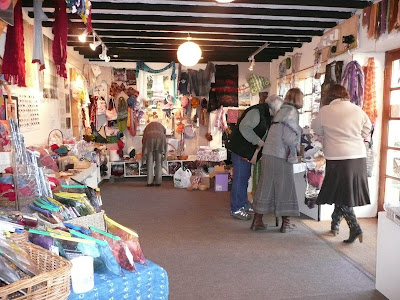 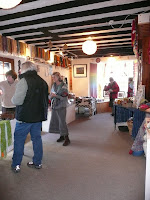 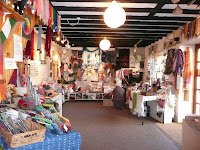 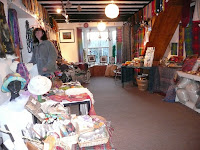 Posted by Helen
Today was day one of a two day Artisan Market at Trefriw Woollen Mill near Conwy North Wales. There were three of us there, Anne , myself and Wendy. Both Anne and Wendy demonstrate spinning and sell their own work from May to September and Iwas invited as well probably becuase the market came out of a suggestion of mine that since Anne was there all the way through the winter for the first time she and Elaine whose family owns and runs the mill ( three generation family business) should advertise her presence to the local Spinner Weaver and Dyer Guilds. Somehow this became a two day Artisan Market in which I became involved. To enable us to make up a poster I took some photos mostly of Anne's work at the end of the day I was visiting her using the candle light symbol on my camera as the light was going and fortuitously this came out quite well. 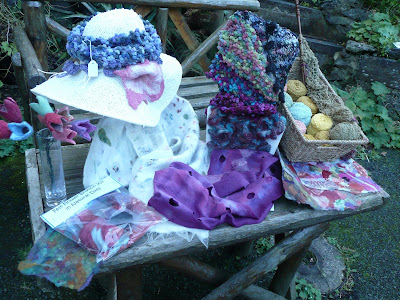 I made up the posters, Elaine did a fantastic job advertising the market to local papers, Anne and Wendy dropped leaflets around the place and I emailed and handed them out to people who came to my workshops . This was all very much at the last minute having been organised about six weeks ago so none of us were hoping for much -given the normal take up of craft fairs, the recession etc- but to our astonishment we were busy all day , the first visitors if not quite queueing to get in at 11 am were nonetheless there on the dot. Wendy asked everyone how they had heard of the event and we were all fascinated to learn that we had fibre enthusiasts coming as a result of my email, interested members of the public coming because of local advertising and friends of the mill as well as guild members.
I managed to take a few pictures but generally when there were not so many people around but here they are to give you a flavour.
I sold lots of inks-I was so pleased as at the Woolfest I did not sell a single bottle but this autumn they have really started to sell. Maybe it is the addition since the summer of purple, blue and bronze.

Posted by Helen
Hi every body I am back from Jersey which I will blog about later but this is just to tell you that there is a new natural Dye blog, Jenny Dean's wild colour, on the blogging scene. Jenny Dean is the author of a number of dye books including Wild Colour and produced one of the first books The Craft of Natural Dyes (I think - I can 't find my copy at the moment so that bit is from memory) which focused on environmentally responsible dyeing. Jenny is also very knowledgeable about dye plants. I also took a very enjoyable and interesting natural dyeing workshop with her years ago which I can still remember and for which I still have my samples.

While I was away in Jersey and with a bit free time on my hands I started a new blog. This is Natural Dye Inks and I hope that as well as my paintings in natural dyes that all those who has brought the inks from me will also post up their pictures too.

Welcome to two new followers who pooped up while I was away, Madeline and Fibre Fanatic.
Posted by Helen at 9:32 pm 13 comments: Links to this post