Art Yarns or Extreme spinning! ( And the Textile market)

I have been having fun! Early on this year when I was recuperating from Pneumonia I came across Pluckyfluff's book Intertwined , full of wonderful textured yarns. A light bulb moment came "Idid not need to spin for a project-which I find boring- I could spin for fun!" and as the mood took me and use up some of my stash into the bargain. This November after the dreaded horrible asthma and huge doses of steroids etc etc I suddenly felt as though all the energy had drained out through the bottom of my legs and gone somewhere. On top of which we now have a wonderful cosy sitting room with fantastic wood burner.
So guess what? Some ( but only a tiny bit really ) of my stash mysteriously moved into corner of the sitting room My lovely lovely lendrum spinning wheel took up residence and I was away spinning textured and very textured yarns in the evening when I am too tired for anything else . At first I thought I would just spin but everybody ( well nearly everybody) was so enthusiastic about the resulting Yarns I decided to sell them. I had a few at the Real Colour Show where I sold some but here are the ones I have spun for my Next Event 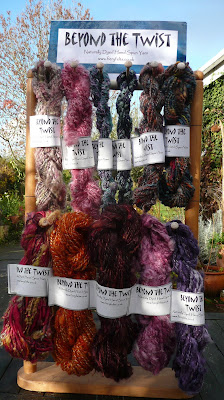 This a wonderful event-last year it was called The Artisan Market and there were only three of us selling but this year it is much bigger with Me selling fibres ( new range Beyond the Pale- merino's,cashmere and silk, teeswater) Beyond the Twist Yarns, natural dye inks ,brooches books& kits. Debbie The Mulberry Dyer, with dyes, books, yarns tools, my friend Anne with brooches, scarf kits superb designer knitted scarves and more more more!
I will be putting the yarns on my website in the next few days.
Posted by Helen at 12:39 pm 6 comments: Links to this post 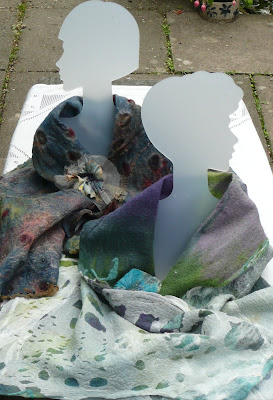 Sunday 15th
When I was at the Real Colour Show at Llanidloes in mid Wales a local shop l'Amoire, bought all my fine stoles of which I had three, a fine felt collar and a fine felt scarf.,This means I have now sold all I have made which is enormously satisfying. So now I am starting to make some more! These are being made using 17.5 micron Merino that one of my students at Lincoln Summer School told me about-and which I got from Adelaide Walker in Yorkshire. Thanks to Bettina of Woolly Bits I have also bought a kilo of 16 micron merino from Germany. These are all Merino's from South Africa and so not from sheep which have been muled. Yesterday I dyed my first 100g of this -worried that being so fine it might felt-but it seems to be okay. Today however I am going to make a stole in terracotta using cashmere and silk as the first layer and 17.5 micron merino on the top. I dyed the cashmere and silk yesterday using madder, cutch, osage orange, and cochineal extracts of natural dyes. This is now hanging from a chair in front of a wood burner drying out. It is a still a little damp.The 17.5 micron merino I dyed some while ago as I have a commission to make a stole in terracotta. The 16 micron will have to wait-it is drying and I don't want to hurry it and perhaps felt it!
Thursday 19th
The fine merino stole is still sitting wet and damp on my table waiting to be further felted. It won't come to harm like this but I had to put it on hold as I had a commission to dye fine merino and silks. A welcome bit on money in a quiet month. Yesterday I decided to try spinning again with Abergele Guild of Weavers Spinners and Dyers which meets at a lovely village in Llanfair TH on a wednesday afternoon. However we have had a lot of rain and as I drove and saw the flooded fields Ihad mny doubts about my wisdom in going. If you click on the link you will see what met my eyes as I came down the long hill into the village.
This is the 16micron dyed and ready to be felted 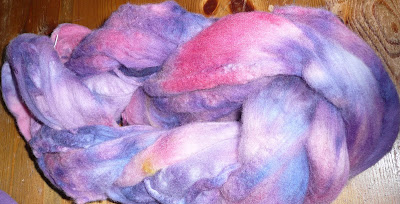 Posted by Helen at 9:57 am 6 comments: Links to this post 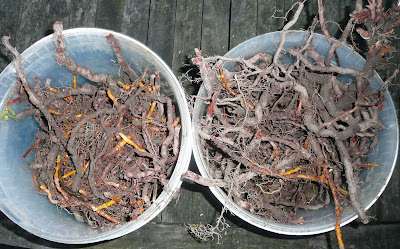 I haven't been blogging for a while- you may have noticed! There are lots of reasons some of which are being very busy and having severe asthma for six weeks but these are boring -the real reason is the combination of a brand new laptop and my springer spaniel. My springer spaniel, called Walnut because the brown of her coat is the colour of the dye given by walnuts, hates me being on the computer. Every time down I sit down at the computer desk she pats me commandingly with her paw which usually means "stop wasting time doing that and throw a ball" but sometimes means "feed me" but more usually just " I am a poor pathetic deprived and ignored dog give me some love ".

I love gizmo's, computer technology and all that and so have long hankered after a lap top consequently when I sold a picture while I was open for an open art studio event in Septmeber -Helfa Gelf definitely on next year- I brought a laptop. Hooray! One of the events I was also being busy over was the Real Colour Show, a ten day feast of natural colour, talks, workshops and lectures in mid Wales in October . It was a fantastic event-hopefully on next year- and as I had promised over six months ago to give a talk at it about how I paint with fibres via a laptop and digital projector, I had to get a laptop, work out how to use it, down load all the free share wear I use(thank you Leigh Tate who showed me how to do that) devise the talk, import pictures from my pc, work out how to do a digital presentation all in the first week of the event -hence not blogging about it -my original intention. I did my talk -to all of about 12 people which was a bit disappointing.However other demo's presentations and workshops were much better attended.

After all this I decided to take November off. Goody goody I thought I shall blog in bed first thing in the morning or last thing a night on my lovely new laptop. This is where the springer spaniel comes in. I start to blog- a nose appears then before I know what has happened a nose and a paw are laid on the lap top. That is why I have not been blogging.

We have been working hard on the dye garden or rather Enys son-in law, Jamie, has as he has a landscaping business. He has been clearing trees, trimming hedges and in the summer helped John put up a new summer house. (AKA The Man Shed) In the photos below you can see him and his brother demolishing a rather hideous raised bed and incidentally entertaining the dog who tends to think all this is being laid on for her benefit. 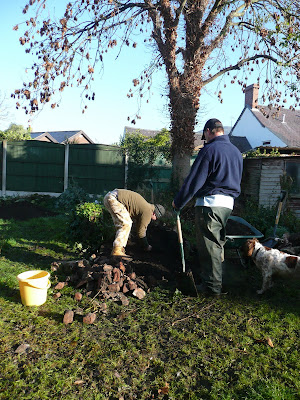 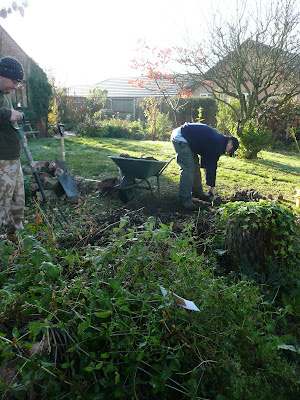 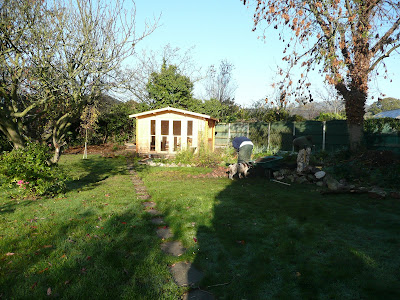 foreground of the second photo. This is now three years old so after the wall had been demolished Jamie carefully picked out all the madder roots for me. All 2.8 kilo's of them. Some of the roots are 1/4 inch thick and are bright orange. If you break them and expose the orange root to the air they turn red.

The bed had a tendency to be a bit dry even in our wet climate and was overshadowed a bit by a large ash tree. Apart from the odd bit of organic chicken manure that is all the plant has had. However it was obviously very happy and healthy and rambled all over one half of the bed.The other half was full of golden rod which was not so keen on the drier conditions and flourished better in other parts of the garden

The new beds will be filled with dyers corepsis-it took my entire dried crop to make 8 bottles of a fabulous orange ink , and dye 200g of merino to a burnt orange, so I want more and persicaria tinctoria and chinese woad. I ran two dyeing the blues workshop in my studio last summer and could have run more if I had had more plants!

Welcome to the new followers- I do usually blog more than I have been recently and now things have quietened down a bit I shall be back to blogging form! The next thing is to dye with some of the madder and dry the rest and leave for a year. So hopefully next year I shall see whether it is worth drying madder. It is supposed to bring out the reds.

Posted by Helen at 4:27 pm 7 comments: Links to this post