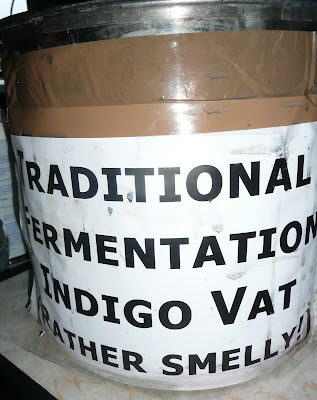 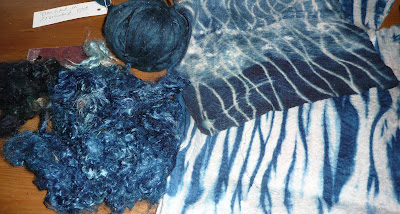 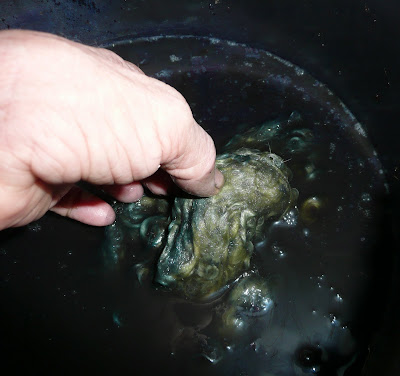 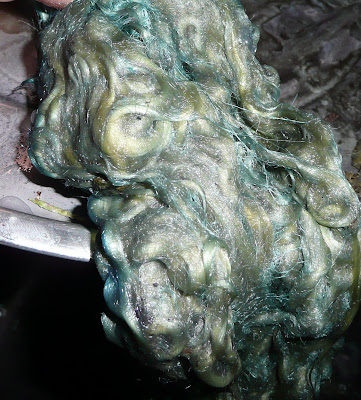 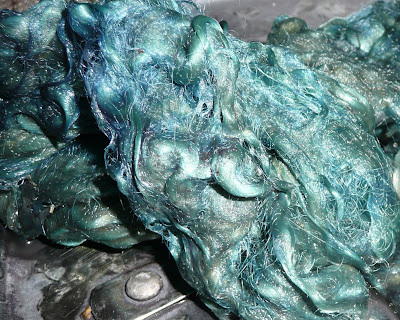 I have had a fermented indigo vat on the go now for over a month. I set it up for a Dyeing the Blues workshop in my studio at the end of August and it has been going ever since and students at my most recent Dyeing the Blues on the 24th of September were able use it. My visitors coming to visit over the past two weekends of the Helfa Gelf Open Art Studio event have been intrigued by it and a few have braved the label of "rather smelly" and asked for a demo. One male visitor who was studying, he told me, for a diploma in archaeology, lifted the lid to have a sniff presumably to get an authentic whiff of the past! I tell people that dyeing with indigotin (the proper name for the indigo blues ) is ancient, widespread and that for thousands of years this is how people have got blue and they are mostly fascinated.

This particular vat has been superb. It is a madder bran vat using woad ash lye-a 17th century recipe I originally got from Sandberg*. wood ash lye is easily made by filling a bucket with wood ash and topping up with water. After a couple of the weeks the clear water at he tops is a mixture of potassium carbonate and potassium hydroxide . During my reading for research for my indigo book (The Colour of the Sea and Sky, The Art of Indigo Dyeing) I found references to different types of woodash. It was said that woodash from oak made the best lye for fermentation vats and after that hardwoods. A local woodworker working in oak burnt all his scraps for me and made an oak ash from which I made a lye.This vat is made from that and whether for that reason or not has been superb.

The vat sits on a hotplate originally used for wine making which keeps the vat warm at between 35-to 40-degrees. Fermentation vats do like to be kept warm. The madder and the bran ferment and as they do so they use up all the oxygen in the water. At the start the wood ash lye made the vat alkaline with a pH of about 10. As fermentation proceeds it creates lactic acid and this makes the pH drop so every morning I stir the vat, check the pH adding washing soda if it has dropped . When the vat has no oxygen in and is alkaline the insoluble indigotin converts to its soluble form when it will bond to the fibres. Removing the fibres from the vat results in the oxygen in the air converting the soluble form back into the insoluble indigotin which is bonded to the fibres.

Every now and again ( such as once a week) I drop in an handful of madder and of bran and three times in the last month 10g of indigotin mixed with hot water to a paste.

The million dollar question is -why do I like the fermentation vat so much? The answer is it is so easy to use. You just put something and leave it -overnight more often then not. Oxidise and then put it back for a couple of hours for the deeper blues and you can see from the photo how dark some of my blues are. These are much more difficult to get with the modern chemical vat which has to be carefully balanced to make sure that indigotin is not stripped off as a fast as it is deposited. I also like the sense of being connected to thousands of years of history

This vat has the advantage of being least smelly of the fermented vats and comes from a seventeenth century recipe. You will need:

Put water, madder, and bran in a pan, with the wood ash lye and heat to boiling. Boil for 15 minutes. The scum on the surface will turn pink then a rather gorgeous purple. Allow to cool to 40°C and then add the indigo paste. Maintain this temperature and stir daily.

At 40 degrees C this vat will come into order within two days but the pH will drop rapidly. Add a tablespoon of washing soda on the second day or if you see that fermentation is rapid with lots of little bubbles on the surface, and stir well. As it comes into order you will see a patina of indigo on the surface like a coppery blue sheen. The characteristic slightly murky green liquid underneath may be slightly masked by colour from the madder but experiment by dipping some fibres leave for half an hour and remove. You should then see the yellowy green colour on the fibres.

J.N. Liles The Art and Craft of Natural Dyeing: Traditional Recipes for Modern Use University of Tennessee Press ISBN 0-87049-0


You are most welcome to use this information on this blog for your own personal use but it is copyright Helen Melvin and the information is not to be used for commercial gain.